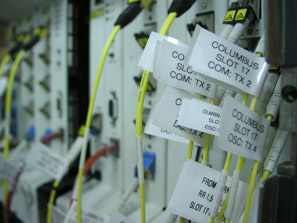 The OARnet fiber-optic network backbone was launched into service in November 2004. It uses one of the most cost-efficient and advanced-technology solutions to directly connect member organizations to the network.

The OARnet backbone network features more than 5,500 miles of fiber-optic cable, currently featuring six major rings that extend across the state to most of Ohio's population.

One network ring circles the Columbus metropolitan area, another connects several communities just northwest of Columbus, and yet another reaches northwest to Lima and Toledo. A fourth ring drops down to Dayton and Cincinnati, a fifth stretches up to Cleveland, Youngstown and Akron, and a sixth circles southeast through Athens and Portsmouth. In addition to the backbone, OARnet operates several local networks that support research and education, including rings in Toledo, Springfield, Central Ohio, Cleveland, Northeast Ohio, Youngstown and Tuscarawas County.

Beyond the in-state reach of the OARnet network, partnerships with other Regional Optical Networks (RONs) extend OARnet connectivity to Michigan’s Merit research and education network, the Pittsburgh Supercomputing Center, and the OmniPoP research collaboration network in Chicago.

OARnet also maintains a global reach through its Cleveland connection to Internet2, the United States' most advanced nationwide research and education network. Internet2 is a non-profit, advanced networking consortium of U.S. universities, corporations, government agencies, research laboratories and international organizations that brings together research and academia with technology leaders in industry, government and international communities.

Across the state, the OARnet backbone uses 59 Points of Presence (PoPs), facilities that house servers and routers, to provide an interface point for other networks, and 13 Regen sites, places where the optical signals are reamplified and reshaped for optimum long-distance transmission.

Unlike traditional networks, the OARnet network can support many networks. With the newest hardware and software upgrades in progress, the updated rings will be capable of supporting 40 independent networks on separate lambdas to transport up to 100-gigabit Ethernet speeds. The transport technology Dense Wavelength Division Multiplexing (DWDM) with ITU Grid frequencies, as well as ITU G.709 transport protocol specification, serves as the core technology for the network.

At the transport layer, the network is based on the Cisco ONS 15454 MSTP multiservice transport platforms. The ROADM optic input/output multiplexers with adaptive configuration are part of the solution. Such multiplexers allow creating 40 optical channels per one optical pair. Each of these optical channels can be of 2, 5 or 10 Gpbs data transmission speeds, depending upon the transponder modules installed in the multiplexer. With the 40-SMR2-C card the network provides multi-degree switching capabilities at the individual wavelength level. Mesh and multi-ring network topologies can now be deployed using the complete flexibility of service routing at all nodes in the network. At the network layer, OARnet employs Juniper M and MX series backbone routers.

Although "IP everywhere" is the expectation for networks, the OARnet network can transport alternate network protocols, such as SANS and native HDTV.

The network uses MPLS to allow a level of granularity in routing that was previously unavailable. By using MPLS in the core, packets are routed to their correct destinations. Intra-state and commodity traffic uses traditional IP, while Internet2 traffic uses Label Switching to identify Internet2-eligible traffic.