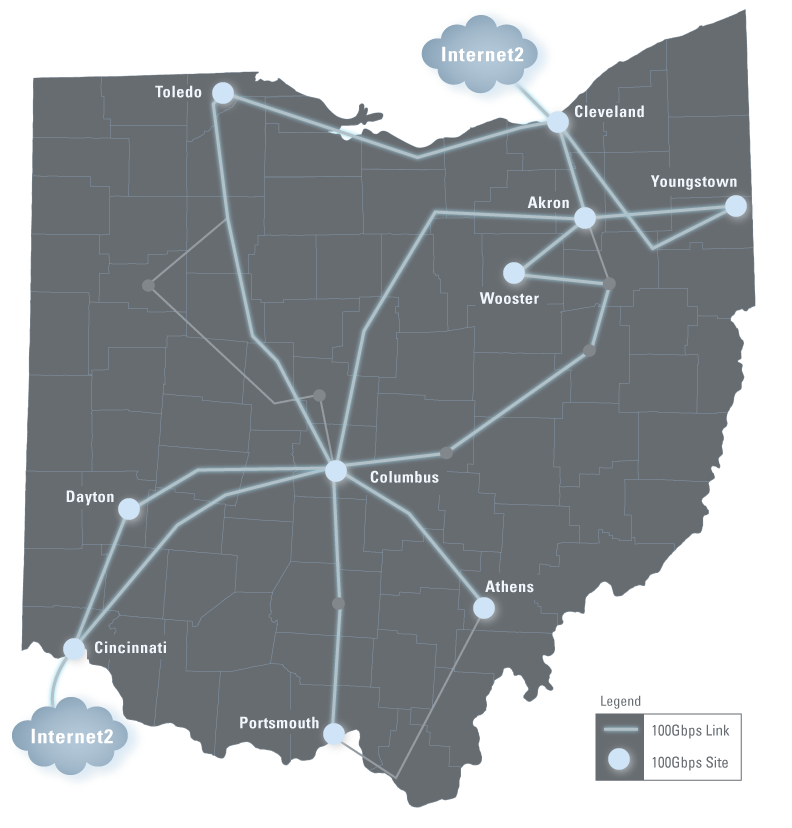 The State of Ohio, led by the Ohio Board of Regents and the Ohio Academic Resources Network (OARnet), invested $13 million in equipment to “open the faucet” of its current broadband network—increasing the speed of its former bandwidth of 10 gigabits per second (Gbps) to an impressive 100 Gbps. It connects to Internet2’s international 100 Gbps network backbone at data hubs in Cleveland and Cincinnati.

Statewide Broadband Speeds That Far Exceed the Rest of the Nation

Ohio has long been a leader in its broadband fiber network and speeds. We recently deployed data at an impressive 10 Gbps, which is on par with the national average. While a few states have limited deployments of 100 Gbps, no other state has as far-reaching a network at these speeds benefitting as many sectors.

These almost unfathomable speeds will open the doors to many opportunities for Ohio. At 100 Gbps:

Ohio already has more fiber optical broadband installed per capita than any other state in the nation, connecting all of its major cities and research institutions. OARnet acquired dark fiber in 2001-02 and then lit its high-speed fiber-optic backbone with scalable architecture in 2004. This state-of-the-art network was designed so that it could be easily upgraded to higher bandwidths, such as 100 Gbps.

Ohio invested $13 million to connect Cleveland, Columbus, Cincinnati, Dayton, Toledo, Akron, Athens, Wooster, Portsmouth and Youngstown by the close of 2012. The investment also included offering limited dollars to Ohio colleges and universities with the slowest last-mile connections to the OARnet backbone to help fund upgrades of those connections to at least 1 Gbps.

Ohio public and private partners also are investing $2.3 million in a state-of-the-art innovation center that will enable and test 100 Gbps technologies, promote the development of compelling broadband, software and advanced technology applications and expand upon Big Data research taking place at the Ohio Supercomputer Center and elsewhere. To be located at The Ohio State University, the center will operate in research collaboration with Internet2, NSF-Future Internet Infrastructure (GENI), UC-Berkeley and other national laboratories.

No federal funds are involved in this initiative. No additional fiber networks will need to be installed in Ohio. The entire network is already in place.

Ohio's economic future depends on creating high-tech environments that support next-generation business applications. A 100 Gbps network throughout Ohio creates a research and economic engine that provides JobsOhio with a valuable tool that can entice and retain businesses to Ohio. The statewide 100 Gbps network puts Ohio at the forefront of a technology-based economy by: